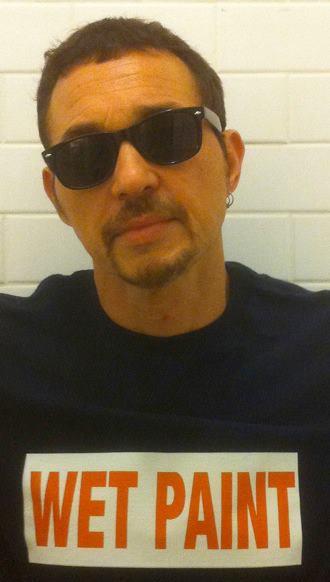 NEW YORK — For the past six years Al Diaz has been looking for signs — literally. He visits subway stations and grabs the notices the city’s transit authority posts after a paint job. At one point, Diaz estimates, he’d stockpiled 300 of the wet-paint signs, although right now pickings are slim.

“I haven’t seen a lot out there lately,” Diaz says, as he sits in a Brooklyn café on a Friday in late November. “It’s funny. Sometimes there’s periods where they’re painting the s— out of the train stations. Right now, I don’t know. Maybe they’ll spruce up things up for Christmas.”

Much like a kidnapper making a ransom note, Diaz cuts up and arranges the sign’s individual letters to create slogans such as “We Await a New Time” or terse bits of social commentary — for example, a photo of a decimated building captioned “real estate 4 sale.” He then tapes the reconfigured signs back up on subway walls. “They don’t stay up long,” says Diaz, “so you make them with the acceptance that it’s a throwaway. Sometimes it’s a lot of work, so it’s kind of a sacrificial lamb.”

The signs are also an acknowledgement of his past. From 1977 to 1979 the now-55-year-old Diaz and the late Jean-Michel Basquiat (arguably the most important, iconic artist of his generation) were SAMO©, a text-based and self-proclaimed “experiment in hype.” SAMO© — the acronym stood for “same old s—” — helped put Basquiat on the map and is so associated with the painter, who died of a heroin overdose in 1988 at age 27, that it would be easy to think that SAMO© was a one-man show.

Al Diaz and Jean Michel Basquiat met while attending City-as-School, an alternative public high school that focuses on learning through nontraditional methods, such as internships. “We shared a lot of real cynical opinions and fancied ourselves the smartest guys in the room. We were pretty cocky,” Diaz laughs. Inspired by a satirical piece Basquiat had written for the school paper, the teens spent hours smoking weed, drinking and writing in their notebooks, honing their thoughts down. The creative process was divided up equally, but it was Diaz — who as “Bomb-One” was part of the first wave of the city’s graffiti writers — who brought the street aesthetic. Speaking on Diaz’s role in the rise of street culture, legendary graffiti artist Lee Quinones says, “His signature will be etched in history as one of the most handsome tags of all time.”

Their identities unknown outside of their inner circle (they were “outed” in 1978 by Village Voice writer Philip Faflick), Diaz and Basquiat tagged walls throughout SoHo and the East Village with deliberately vague aphorisms, “SAMO©Media Mindwash” and “SAMO© as an alternative to plastic food stands,” which captured the public’s attention. “The linguistic play at work in SAMO© is certainly central to the development of jean’s voice as an artist, but it is also very relevant to Al’s work,” wrote Carlo McCormick, longtime art critic for Paper Magazine, in an email. “Diaz is an utterly credible figure in the evolution of illicit public art, but we wouldn’t be talking about him now if he weren’t doing something that is still noteworthy.”

SAMO© disbanded in 1979, leaving Basquiat and Diaz open to new possibilities. As careerist as he was talented, Basquiat threw himself into the glitz and glamour of the city’s arts scene. Says Diaz, “Jean was hobnobbing and hanging out in the clubs.  This was something he was very comfortable with that. I felt uncomfortable in that world, like, Ehh, these people are creepy … the art world was this elitist, white and male, educated — it was really fake.”

Part of Diaz’s disdain stemmed from his childhood. The son of blue-collar immigrant Puerto Rican parents, he grew up on the Lower East Side in the Jacob Riis public- housing projects. “I felt that real class separation,” he says. “I was always aware of that. Even to this day.” Watching as his friend became a phenomenon, Diaz chose to step back, shifting his focus to making musical instruments and playing with avant- guarde jazz musician Elliot Sharp and avant-funk bands Dog Eat Dog, Liquid Liquid and Konk. Diaz was also on rapper Rammellzee’s cult classic “Beat Bop,” which Basquiat produced. “I was in a lot of places. And I should be mentioned here and there. It’s not like I did it for that purpose, but the fact is that I did do that stuff. I managed to record, so I have something to hold on to in that sense.”

A close friend told me — and it really hurt — ‘They’re never going to make a movie about you. And I decided to light a little fire under my ass.

Diaz kept a low profile for much of the mid-’80s, working as a carpenter and cabinetmaker and traveling with his then-wife. Drugs were now in the picture and, as a result, Diaz’s life was unraveling. Everything came to a head in 1987 when Diaz tried to buy cocaine on the Lower East Side and was confronted by a dealer who had accused the artist of ratting him out to the cops. After a heated exchange the dealer beat Diaz with a bat, he says, leaving him covered in blood, his jaw broken in two places and several of his teeth cracked. He spent five days in intensive care. The attack, he says, was devastating and life altering.

“I hated everything,” Diaz says. “I hated art, the art world. I started doing even more drugs.” Some of his rage was funneled into wood carving. (He’d begun creating small trucks, statues of his cats, small altars and other objects out of wood.) But Diaz was losing control, he says, and by 1991 was a “full-blown junkie.” In an attempt to
 get clean, Diaz moved to Puerto Rico in 1996, intending to stay for three months. Instead he built a house and lived on the islands for almost three years, putting all of his energy into rebuilding his life. “The art thing was on hold. It was hard enough just to keep it together, because I had been such a low-bottom dope fiend.”

Eventually Diaz came back to New York and continued working with wood. He relapsed after four years of sobriety at the age of 41 he says, and kept getting high throughout his 40s.

Ironically his connection to Basquiat would be the catalyst for Diaz’s getting clean. In 2010 he was interviewed for the Basquiat documentary Radiant Child and a year later attended the opening. “I saw myself on film,” Diaz grimaces. “It freaked me out that I looked so horrible and that I was in this film and apparently had some kind of importance in all this. It struck a chord because maybe a month later I got clean and have been clean ever since.”

Right before entering rehab Diaz had started pulling wet-paint signs down from subway walls. Now, newly sober, he was ready to rediscover who he was as an artist. “A close friend told me — and it really hurt — ‘They’re never going to make a movie about you.’ And I decided to light a little fire under my ass.”

Diaz’s current collaboration with montagist Jilly Ballistic adds a photographic element to the wet-paint signs. “What Diaz is doing now is digging deeper for meaning, from where he and Basquiat started with SAMO, by not only deconstructing phrases, but deconstructing words themselves,” Michael Holman, a filmmaker and writer, wrote in an email. “The ‘cut up’ words, married to [Diaz’s] borrowed, photographic imagery, adds a surprising precariousness, as the finished ‘pieces’ hang in open, public spaces, vulnerable to the whims and comprehension of the passerby.” Paper Magazine’s McCormick concurs, adding, “[The wet-paint signs] seems like a natural extension of his prior work as well as a  clever reinvention of both his letter-based aesthetics and smart-ass sense of humor — and we all know that continuity and novelty are a hard balance to strike for any midcareer artist.”

To that end, in 2014, Diaz was featured in two group shows. “I believe in his work and want people to know about his legacy,” Saviour Elmundo, who curated one of the shows, writes in an email. Along with taking steps back into the art world, Diaz is frequently asked to participate in panel discussions about graffiti and, of course, Basquiat. He says he is flattered by the invitations, yet has no interest in being “the guy who knew the guy.” Diaz is willing to talk about the past, yet not at the expense of the present.

“I’m not shy about saying what I’m doing now,” Diaz says. “As a matter of fact I kind of refrain from feeding people their ‘So what was it like’ s—.

“I don’t want to talk about what it was like,” he says. “For me it’s just not enough. So ‘What are you doing now?’ is the question.”