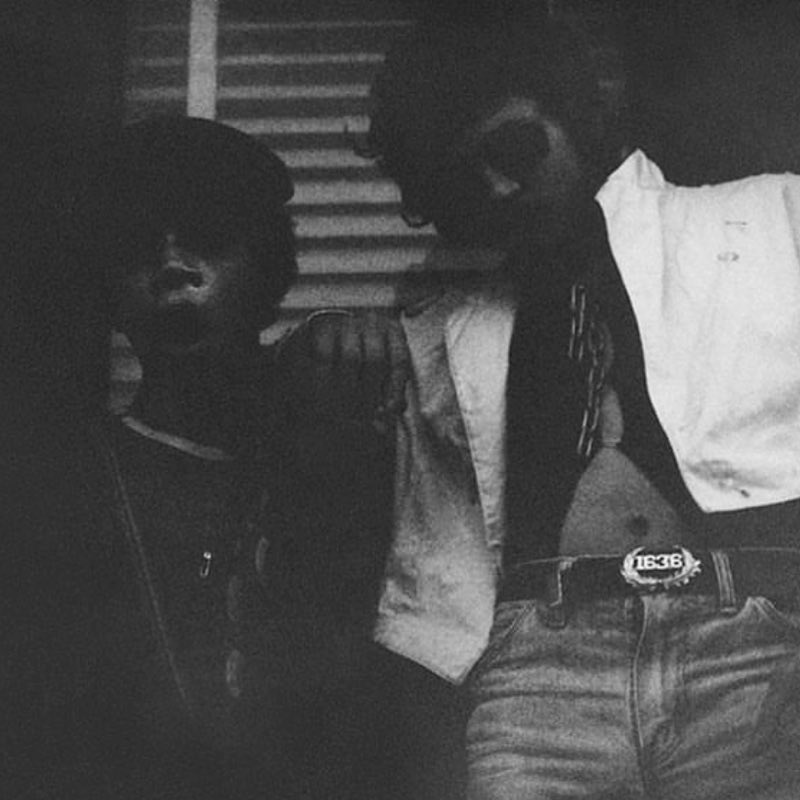 In the late 70s, when graffiti tagging was in full swing across New York, the word ‘SAMO©’ began cryptically appearing – sprayed on the city’s walls.

The new style countered the name and street number format that had so far reigned supreme. Behind the words were two teens named Al Diaz and Jean-Michel Basquiat, who collectively identified as SAMO© and used the moniker as a channel for their angst. It was witty, confusing, confronting – it got people’s attention.

While Jean-Michel Basquiat went on to become the Jean-Michel Basquiat, SAMO©’s influence on his career is something rarely explored. Not a single work of the late artist’s exists in a UK public gallery nor has a major exhibition been held on his work until later this month – the Barbican will open a major retrospective that will cover the many facets of Basquiat’s art and life, including his time spent as one-half of SAMO©, alongside Diaz. Sadly, SAMO©’s writings have long been painted over or scrubbed away, with Diaz telling me over the phone from New York, “I certainly don’t know of any but it would be great if there was.” He adds that if there were any, they’d likely be hidden in a basement somewhere.

Long before the pair met, Diaz was a fully fledged member of New York’s graffiti movement. Raised in a housing project on the Lower East Side (“It was a real shithole then”), Diaz began writing graffiti on trains and buses at age 12. “I was writing Bomb 1,” he recalls. “The old graffiti format was a nickname and then a number, which was sometimes your block, the street you lived on, or the building. It showed where you were from.” During its inception, the graffiti movement was limited to NYC with sproutings in Philadelphia. “It was not the refined street culture it has become,” Diaz continues. “It wasn’t an international phenomenon, it was an inner city thing in the side boroughs, like a kind of secret organisation. It was a sport. A way to be cool and different. No-one had been doing it before. There had never been a phenomenon of going around writing your name on the wall as many times as you could so people would notice it.”

Diaz’s reasons for doing it were just this – to become someone that people knew. “Before people would go around writing gang names, such as ‘Sharks’ or ‘Jets’, but this was all about ‘you’. And I was looking for an identity. I wasn’t a very good athlete or anything, and I liked to draw. But at the same time, I liked to run around in the street, get chased, and get into trouble… It was perfect.”

It was in high school that Diaz met Basquiat. “He was shy around the more aggressive types, like the skateboarders or the graffiti arists,” recalls Diaz. “He wasn’t a tough guy or anything. But with his own circle of friends, he was pretty outgoing. Somehow, we really hit it off (because) we just kind of had the same sense of humour.” The friends shared musical and artistic interests, and both held Hispanic roots. “It was enough to cement our friendship,” says Diaz. “We were both big on words and language, and that really did it. I don’t know if we were aware of it at the time, but it was definitely something.” Attending an alternative high school in Brooklyn Heights, Diaz and Basquiat spent their time visiting the city’s museums. “If you needed art credit, you could do a course where you would go to MoMA, or something, and Jean and I did that class together. But he was real problematic – he was always arguing with this woman called Sylvia, who conducted the tours,” laughs Diaz. “I always wondered if she remembered a young Jean-Michel and later on put two-and-two together and thought, ‘oh fuck, that guy became famous.”

Combining their interests in art, Diaz and Basquiat, along with some other students, started a newspaper named Basement Blues Press. It was here that SAMO© was conceived, through an article that Basquiat was working on for the Spring 1977 issue about an ideal yet imaginary religion that he called SAMO. The feature details a fictional dialogue between Harry Sneed and Quasimodo Jones – sat in the American food chain Papaya King, Sneed talks of a desire for “modern and stylish” enlightenment. Jones tells Sneed about various religions, but is enamoured by the idea of “SAMO”, “a guilt free religion”. A few days after the article was published, Diaz and Basquiat printed out flyers that featured fictional testimonials from people who claimed that converting to SAMO changed their lives. “We thought it was hilarious”, laughs Diaz, “we were just kids.”

The reactions were enough for the friends to keep going with it. Taking the word, “SAMO” – which initially stood for “Same Old Shit” – and turning it into a medium for them to vent frustrations, personal jokes, whatever they wanted, through graffiti. By 1978, SAMO© had begun to appear on walls across the city. “There was a famous graffiti artist that always wrote, ‘Pray and Jesus Saves’ and all these kind of religious things, and I thought we could go about it in that style. We just kept elaborating on it. In a couple of weeks, it was like ‘SAMO© AS AN ALTERNATIVE TO GOD’.” They wrote it on a church on West Broadway, although there is no visual documentation of it now: “Back then, in the 70s, you’re not really thinking, ‘Oh, let’s save this for posterity. That was not really on the agenda,” adds Diaz.